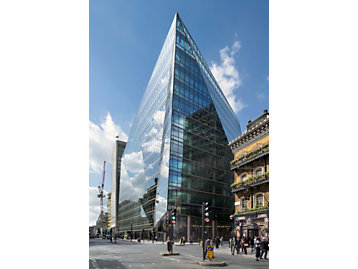 Power for a London Landmark

62 Buckingham Gate, SW1, is a cutting edge, environmentally-sensitive mixed-use development located in Victoria, London, one of the city’s most sought after destinations for office, retail and residential space. Developed by Land Securities, the largest commercial property company in the UK, the site offers premium office space as well as retail and leisure and has become home to a wide variety of leading international businesses.

Bells Power in London, who have represented FG Wilson as a dealer for 30 years, were engaged alongside design consultant WSP. Heavily involved in the site design co-ordination, Bells worked closely with the client and their construction team at NG Bailey, to deliver a solution that would meet the brief.

Providing a package of three generator sets and PLCs, the project was completed by Bells in just over 18 months, from the initial order to completion and handover.

The acoustic requirement for 62 Buckingham Gate was 65 dB(A) @ 1m and catalysts were installed on each set for emissions. Bells were engaged to supply, install and commission two P2000P1 tenants and one P605E life safety 400V generators basement level B2. Bulk fuel storage systems for 72 hours (tenants) and 24 hours (life safety) were installed, together with associated fuel control and pipework systems. A full hot/standby Allen Bradley PLC system with outstations at each switchboard was installed to control the mains operation of the building for any perceived scenario.

Speaking about the project, James Murphy, Managing Director of Bells Power said, “This project ran on a very tight budget, against the backdrop of the global recession. We had to redesign much of the scheme for increased loading, including the requirement of TB210, which increased the size of the life safety generator. The PLC was also complex as we had to control four transformer feed sources. The building is now fully let and since 62 Buckingham Gate, we have won further projects with Land Securities – 1&2 New Ludgate, One New Street Square and Nova, Victoria. We are now the preferred generator designer with WSP and we have won more projects with SRM and NG Bailey.”

Dave Heir, Senior Project Manager at NG Bailey adds, “From the early stages of the project, Bell’s understanding of the requirements were of great assistance to the design team. They attended numerous meetings and provided a great amount of information to allow the designers to produce their documentation. Bells took a leading role in ensuring the complex interfaces between the various packages were fully understood at an early stage. The on-site installation works were all in accordance with the construction programme and the quality of the install was kept to the high standard demanded on site. The generator elements of the IST and Black Building testing were repeated a number of times, on each occasion the generator sets operated reliably and exactly as expected. Bells proved to be a reliable sub-contractor, their knowledge of generator sets and how to install them proved a key factor in our successful delivery of this project.”

To find out more about FG Wilson, visit www.fgwilson.com and for more information about Bells Power visit www.bellspower.co.uk