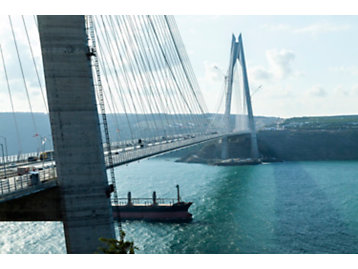 The Bosphorus Strait is one of the world’s most important and busiest waterways, known most of all as the line at which Europe and Asia meet. It also cuts through the major city of Istanbul, home to 17 million people.

Huge bridges keep the city connected and one more was opened in August 2016, the Yavuz Sultan Selim Bridge, carrying road and rail traffic and marking a big improvement in the city’s transport infrastructure.

The bridge itself is the world’s tallest suspension bridge, towering 322 metres above the water and it’s also one of the world’s widest suspension bridges at 58.5 metres. There are 8 lanes for cars, carrying the North Marmara Highway and a two way rail system, with a main span of 1408 metres across the Strait and total length of 2,164 metres.

FG Wilson Turkey were selected to provide the power for this huge bridge, supplying and installing four 605kVA generator sets for the bridge’s towers, road lighting, tower escalators, service pumps, dehumidification units and architectural lighting. To put in perspective, this is the same as the power needs of a large shopping mall, two five star hotels or a 300 bed hospital.

The FG Wilson generators are located in both European and Anatolian towers of the bridge. The generator sets are equipped with silencers and are connected into the bridge’s BMS controls. To enable this, FG Wilson Power wizard 2.1 control panels were customized for remote performance monitoring and control via TCP/IP.

Throughout, FG Wilson Turkey have been working closely with FG Wilson’s UK-based engineering teams, taking the project from design and manufacture, through to installation and commissioning.

Speaking about the installation, Koksal ER, CEO of FG Wilson Turkey said: “At almost $3 billion, the Yavuz Sultan Selim Bridge is one of the largest infrastructure investments in Turkey and it’s making a big difference for people living in Istanbul. Because of the sheer volume of traffic using the bridge, uninterrupted and continuous supply of energy is of vital importance. FG Wilson Turkey are very proud to be supplying generator systems and we are delighted to see our brand as the guarantor of power for an infrastructure project on this scale.”

The units were manufactured at FG Wilson’s UK facility in Larne which houses Europe’s largest testing and development facility for generator sets, built with a total investment of $26 million.

Speaking after the completion of the project, Ann Brown Managing Director of FG Wilson said, “We’re delighted to play a part in this landmark project, one which is making a very positive difference for people in Istanbul. It underscores the reliability of FG Wilson generator sets, the expertise of FG Wilson Turkey and our engineering team in handling the project all the way through to installation, and also the high levels of support which FG Wilson Turkey will give to the customer to ensure our generator sets have a long, efficient and productive working life.”