Online All The Time

Online All The Time 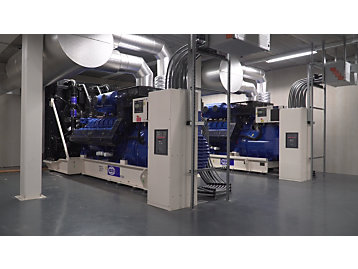 About one third of all European data centres are located in the Amsterdam area, taking advantage of AMS-IX – the world’s largest internet exchange.

Based in Steenbergen, Nedzone is an ISO certified carrier and partner-neutral data centre offering colocation, selling bandwith and hiring transportation capabilities to other data centres and offices.

Due to expansion of the data centre in 2016, increased emergency power was required. Kemper en Van Twist were awarded a contract to replace two of the three P500P2 models for P1750 generator sets, still in a N+1 configuration with the remaining P500P2 generator set. Yearly usage is 12 hours / year for test running and running during mains failure.

Keeping the data centre in service during the replacement process was a key consideration, explains Wilhelm Potters from KVT:

“Maintaining consistency of service was crucial throughout the delivery of the project, so we supplied the required temporary generator sets to keep all systems running in the N+1 configuration.

“The generator sets also had to fit inside the same technical room as the P500P2 generator set. We supplied the sound attenuation for exhaust and cooling air to meet the noise level, as the canopied P500P2 did outside the building.”

Nedzone can now look ahead to future growth, confident they have sufficient emergency power. With a strong relationship in place and KVT currently delivering a maintenance contract, a future order to replace the remaining P500P2 is likely.