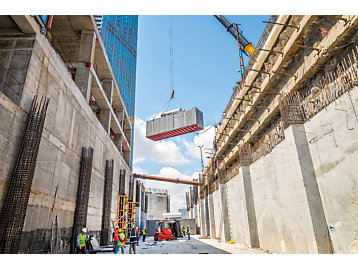 Through centuries, Turkey’s position on the world map has always played a key role in its economic development, connecting Europe with Asia and making the country a focal point of trade and commerce. Recently, Turkey has seen some of the region’s most exciting and ambitious infrastructure projects and it’s also home to the largest city in Europe by population, Istanbul, with a population of almost 15 million and still growing rapidly.

Demand for quality electrical power has increased dramatically in that time. FG Wilson, one of the world’s longest established manufacturers of generator sets, has been part of the Turkish economic landscape right through with a presence in the country since the 1980s.

FG Wilson are represented by FGW Jenerator Turkey, initially opening as a sales office and since 2009, a locally managed dealer with offices in Istanbul, Ankara, Izmir and Erbil in Northern Iraq, together with service centres throughout Turkey.

Koksal Er, CEO of FGW Jenerator Turkey says, “We track urban transformation trends and we’ve been actively participating in many major power projects in Turkey, Northern Iraq and increasingly with Turkish contractors working on projects globally. We work very closely with developers on power projects from initial concept design through to installation and commissioning of generator sets. We’ve a dedicated team of specialist engineers for major projects, and we work seamlessly with the UK-based FG Wilson engineering team all the way through each project.”

The list of projects completed by of FGW Jenerator Turkey reads like a catalogue of the country’s most prestigious construction and infrastructure projects. One is the Yavuz Sultan Selim Bridge, a $3 billion investment and the world’s tallest suspension bridge, carrying eight lanes of cars and a two-way rail system across 2,164 metres of the Bosphorus Strait. The bridge relies for power on four 605 kVA generator sets for the bridge’s towers, road lighting, tower escalators, service pumps, dehumidification units and architectural lighting.

In the last few months, FGW Jenerator Turkey has been working on standby power for one of Istanbul’s most desirable new addresses, Pruva 34, developed by Doğa Madencilik, part of the Doğa Group, well known for projects that combine state-of-the-art technology products with contemporary architecture in safe, high-quality and durable buildings. Seven P900E1 generator sets were ordered to meet a requirement for 6,300 kVA and were installed as two separate synchronised groups. FGW Jenerator Turkey provided installation design of the generator room in accordance with local fire code requirements, also managing the design of the synchronisation panel and providing a consultancy service for sound isolation, seismic isolators and a daily fuel system.

Koksal says, “It’s an exciting time to be here and to see these amazing buildings and infrastructure projects take shape. And it’s wonderful to be a part of it. As each project completes successfully, we take that great experience and move on to complete new challenges.”