Power Quality in One Complete Package

Power Quality in One Complete Package 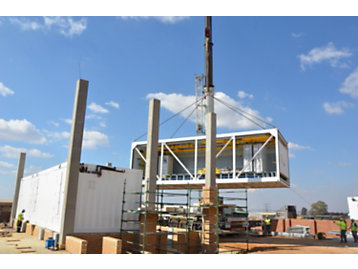 Just sit for a moment and think back twenty years, to the way you worked then, how you communicated, how easy, or difficult it was to find information. And if you’re lucky enough to be too young to remember that far back, imagine no instant communication, using pen and paper, faxes, letters, floppy disks, unconnected computers.

In 1999, Menno Parsons was working in the UPS division of an electronics company, watching the birth of the internet. He could clearly see the growing need for stable, high quality electric power for businesses which were becoming dependent on IT and fast communications.

Putting his thoughts into action, that year Menno decided to strike out and form his own business, Master Guard (Pty) Ltd. At first, focus was on static UPS (Uninterruptable Power Supply) products, usually for customers in telecommunications, banking and industry.

Soon, however, the product range began to grow. Menno recalls, “Back then, the elements of a power system often came from many different suppliers and this made it difficult for customers to make the right decisions. Also, because the different components of power systems were all integrated, if something went wrong, customers often needed to call out suppliers of all the components to figure out one problem. Generator sets and UPS systems all work hand in hand, so we started offering them together as one integrated and fully supported system.”

From there, it was a short step towards offering changeover control panels together with distribution boards which switch from the utility supply to the generators when power goes down and in reverse when utility power is restored.

Five years later in 2004, Menno saw the boom in data centres, but what was fast becoming clear was the traditional planning model for a data centre, now sometimes called the snowflake model, had no chance of keeping pace with rapid growth in internet traffic. His solution (now commonplace, but then revolutionary) was a modular data centre, where servers and cooling systems are held in containers. When more capacity is needed, it’s as simple as bringing in more modular containers.

But there was something else. Menno says, “When you’re managing a data centre, or any critical environment, you want near zero risk of downtime, which means rapid service for hardware and power systems. That means close monitoring and predictive maintenance by people who are complete specialists in all aspects of the operation. Issues need to be resolved well before they become problems.”

So in 2007 Menno opened the Life.NET remote monitoring centre which gave Master Guard the ability to monitor critical equipment and the entire data centre environment. This meant high efficiency was maintained for customers at lower costs than hiring their own internal specialists. And it meant that technicians were often on-site before anyone at the data centre was even aware there was a potential problem. The data centre operators could now focus on their business without needing to troubleshoot on operational issues.

Reflecting the major changes in the business, in 2010 Master Guard was reborn as Master Power Technologies (Pty) Ltd.

By 2014, it was time to find a strong brand of generator sets with a reputation for reliability and at the very same time FG Wilson, who have been making generators for over 50 years, was looking for a strong partner to add value to their brand. To sell and support the FG Wilson range of generator sets, Master Power established a new Blue & White Division covering South Africa, Namibia, Botswana, Zambia and Mozambique. Menno says, “FG Wilson generator sets are a perfect match for customers who have critical power needs. The products are reliable, tested and supported by a world class parts and service infrastructure. And it’s a brand which has a long track record.”

That track record is more than 600,000 generator sets sold since 1990 alone. It’s is a relationship which works well for both: FG Wilson are masters at simplifying complexity and for any project, Master Power can count on a team of 300 engineering specialists at FG Wilson’s main UK facility to support with generator set design and project management. Together with Master Power’s world class remote monitoring and support capability, it’s a strong package.

But Menno hasn’t stopped for breath. He says, “We’ve now over 200 employees and coverage right across sub-Saharan Africa. We’re looking at all the bigger telecoms, banks, mines, commercial infrastructure and manufacturing companies to market FG Wilson generator sets, solutions and services. The value we can bring is one high quality integrated system supported by one experienced specialist vendor.”